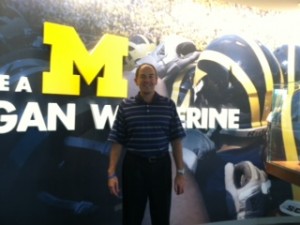 Last week I was selected to speak to the University of Michigan for their annual MGoBlue Day event. Their Athletic Director Dave Brandon has done a tremendous job of creating a compelling vision for where they are headed and how they will get there. Their goals are high not just in athletic excellence and fundraising, but also creating World-Ready Graduates. They are even developing a new program to help them with the transition from being a student athlete in that unique atmosphere with set schedules, tutors and coaching and how to move into the “real world” and establish a career.

In the locker room, set up a circle with the Block M in the center, there was something on the wall I had not seen before. Check out the picture with all the names and character traits and lights. Next to each name is a specific character trait Head Coach John Beilein assigns each player. Glenn Robinson – Dependable, Nik Stauskas – Confidence for example. In the middle you will see a switch next to each name. Before they take the floor each player will SWITCH ON their light and really lock into that character trait.

They will all say “WE ON!” It stands for “When Everyone Operates N’sync. They literally Get Switched On BEFORE they take the floor. Does it work? They won the Big 10 Championship and went deep into the NCAA Tournament to the Elite 8. As you will also see on the light panel is “WE WORK.” That is so simple and easy for the players to lock in on as a pre-game ritual. The key is they do this before the game begins and they do it EVERY. It is a ritual that consistently puts them in a peak state to play the best game possible.

I recommend a quick HUDDLE: under 7 minutes, standing up, all positive, share wins with each other, establish objectives for the day, review key performance objectives, music to get pumped and ending with and energetic cheer. I have a new video coming out shortly on doing a huddle. Keep an eye out. 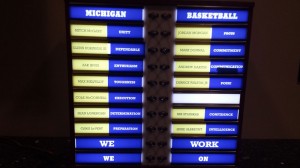