The”top” college football prospects have been in Indy for the annual NFL Combine. They are being measured on a wide variety of short term tests to see how they stack up against their peers at the same positions. Tests such as the vertical leap, timed agility drills and the 40 yard dash. The question is whether this annual ritual is an effective way of judging talent. Last year in the NFL there were 582 players made NFL rosters that were NEVER drafted. Wow, one third of the players. That is amazing to me. Evaluated and somehow deemed unworthy by the traditional talent evaluation process.

What they have a difficult time measuring at the NFL Combine of course is harder to measure – heart, grit, character, ability to overcome adversity and do the right thing when no one is watching or even when everyone is watching. Many of you know I am a proud Oregon Duck and I have followed the career of Marcus Mariota very carefully the last 3 years. Based on what I can see his character and work ethic are impeccable. I believe he will be an amazing pro, especially if he gets in the right system and is not expected to be savior from day one.

The other top QB prospect of course is Jamis Winston from Florida State. I have to admit going to the Rose Bowl and seeing the Ducks thrash the Seminoles was tremend 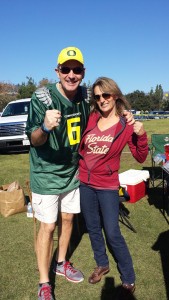 ous. Full disclosure – my wife is an FSU grad, she did not enjoy it. So far Jamis has not shown the character traits of Marcus with many known and likely many unknown discretions in college. He does have tremendous charisma. I will admit that. But there is a big difference between charisma and character. It will be interesting to see which NFL team that will put their billion dollar franchise in his hands.

The University of Louisville did a study where they looked at how players were evaluated at the NFL Combine and how their career turned out. Their study determined there was NO statistical correlation between the results and the Combine and their subsequent NFL careers. None. If you are a college player and read this – GREAT NEWS! Stick with it. If you are not drafted you can make it!

Legendary Bill Belichick whose Patriots luckily beat my Seahawks recently on that amazing last play interception by underrated free agent of out Western Alabama Malcom Butler is traditionally skeptical of “raw talent.” You will rarely see them spend a high draft choice  on key skill positions like running backs or receivers. He looks for players who will fit into their system.

How are you currently evaluating new talent you want to bring into your organization? What are you looking for? Be careful about looking too closely at traditional measurements. Look for hungry people of high character who are coachable and will fit in.